There are now TWO strains of Rabbit Haemorrhagic Disease in the UK. Also known as Rabbit Calicivirus Disease (RCD) or Viral Haemorrhagic Disease (VHD), RHD is caused by a virus that infects rabbits throughout the UK & Europe. As well as being transmitted by direct contact between rabbits, it can spread through the air when rabbits are in close proximity, or via clothing etc. The disease is extremely serious, causing high fever and internal bleeding. It is almost always fatal, in fact in some cases rabbits may simply be found dead, sometimes with a bloody discharge at the mouth or nose.

There are now TWO strains of this virus in the UK.

RHD-1 is the endemic form, for which a vaccine has been available for many years.
RHD-2 is a new variant, having first been identified in France in 2010. It was identified in the UK near the end of 2015 and there have been a number of reported outbreaks in Devon. Rabbits infected with this strain often DO NOT show symptoms, making it difficult to diagnose the condition. Death may result within 3-9 days after infection and rabbits may carry the virus for longer periods of time without showing any signs.

Rabbits can be protected from infection by vaccination against both RHD strains 1 & 2 and we are pleased to announce the arrival of the new RHD-2 vaccine at our practice.

This can be administered from the age of 10 weeks, providing 12 months of protection. It can be used in conjunction with the Myxomatosis vaccine, which we still very much recommend. 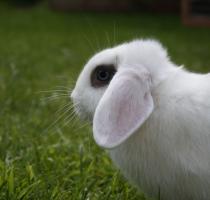